Australia battles for the last drops of water

The Murray and Darling rivers with their numerous tributaries are the lifeline of agriculture in southeast Australia. But the largest river system on the continent is now under threat. Instead of discussing how this river system can be saved, there are bones of contention over who gets how much water.

Without the Murray-Darling river system there would be no life and no agriculture in the hot, dry inland areas of Australia. The drainage area is as big as Germany and France put together. It is 3,375 kilometres long from the source in subtropical northern Queensland to the mouth of the Murray near Adelaide on Australia's south coast.

For thousands of years the rivers, lakes and marshes of the river system have been the centre of life of indigenous Australians. Numerous myths and creation stories surround them. The Ngarrindjeri at the mouth of the Murray regard themselves as part of the river system. "All living things are interlinked", they write to a Government Commission of Inquiry, "we implore all people to respect water and land. We long for fresh, clean water and a healthy landscape."

The Commission was appointed to examine the downfall of the Murray-Darling system. Because the outlook is not good around this lifeline. Clyde Rigney senior, one of the elders of the Ngarrindjeri, is worried about the future of the children of the small Aboriginal community Raukkan. There is barely any water in his home town at the mouth of the Murray. 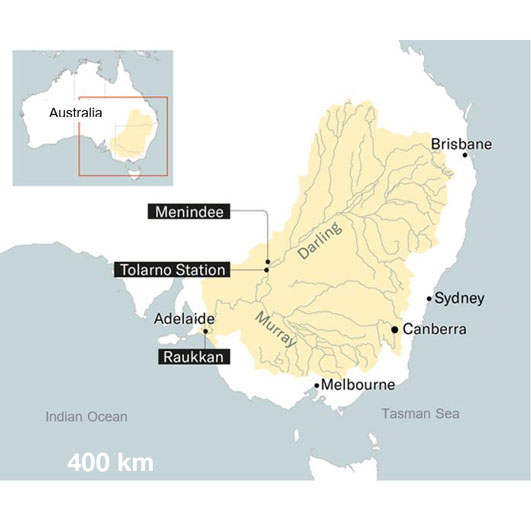 The summer heat fades noticeably in the shadows of the trees. In good years fishing is the leisure sport of many farmers, who work everyday under the blazing sun. Children run riot in the shallow water along the banks of the Murray. Pelicans glide majestically over lakes and marshes where migratory birds from all over the world get together.
A total of two million people live in the drainage area of the Murray-Darling system. This is almost ten percent of the population of the sparsely populated huge country. The rivers and lakes shape the towns and settlements in the eastern inland areas of Australia. Along the watercourses the red dust makes room for grasses, bushes and sturdy white and red eucalyptus trees.

Brown liquid instead of drinking water

But the good years are seldom. The water in the riverbeds is increasingly stagnant in brackish pools, instead of flowing. Millions of fish died in recent weeks in the lower course of the system. Local residents no longer have any drinking water. One example is the Tolarno Station sheep farm which belongs to the McBride family and is located in the far west of the state New South Wales. In the past the Darling supplied people and animals – today its riverbed has almost dried up.

The 12,000 surviving sheep of the McBrides have to share the little water with tens of thousands of kangaroos, emus and other wild animals. It is far from enough for everyone. "The water is spoiled by toxic algae, but the thirsty animals still drink it. More and more often I am finding carcasses in the dust", says farmer's wife Katherine McBride sighing. The only thing that gives her hope is the spontaneous help of fellow human beings. For two months now generous supporters from towns hundreds of kilometres away have been sending trucks with bottled water to the McBrides and their neighbours. The eight people on the family farm founded in 1851 are dependent on this water.

Tolarno Station is part of Menindee town, the official population here is 551. The town centre is actually located on a lake, but this has completely dried up. The drinking water has also run dry. "A smelly brown liquid flows from the taps", says Mayor Darriea Turley, "people can no longer even take a shower with this water." The Australian government cannot simply explain this environmental disaster with the chronic drought.

Throughout its long history the river system has always survived droughts up to now, there are structural problems behind this year's crisis: "Large agricultural companies on the upper course of the river system pump out water in excessive amounts or even illegally for cotton or rice farming", says Turley. It is clear to her: "The Murray-Darling Basin Authority who is responsible for the management of the river system has failed comprehensively." 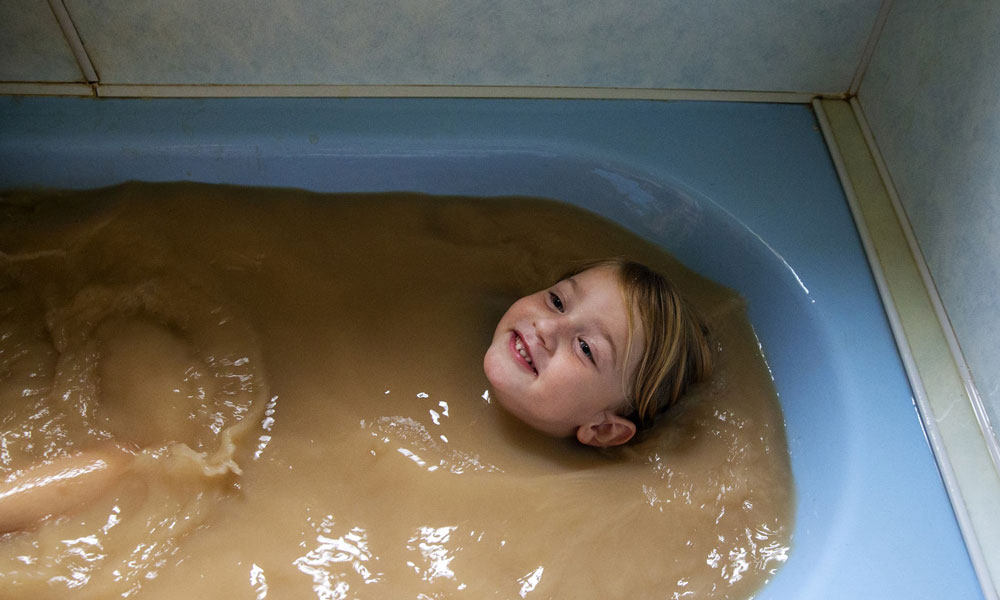 In many places the drinking water has run dry, a brown liquid comes out of the taps. (Image: Jenny Evans / Getty)

The Murray-Darling Basin Authority was founded in 2012 as part of an agreement between the national government in Canberra and the five neighbouring states. It should manage the water so that everyone is fairly treated and the river system is not damaged.

An official investigation that has just been published confirms the Mayor's accusation. The government of the state South Australia commissioned the inquiry. Located on the lower course of the river system, South Australia is severely affected by the water shortage. The investigation report strongly criticises the rescue plan.

13 billion Australian dollars, a good 9 million francs, has been spent from the public purse to date. But the list of failures, which the Commission of Inquiry uncovered, is long: For example, the governments ignored the advice of experts and distributed the water according to political instead of scientific criteria. The effects of climate change on the river system were completely ignored.

Employees of the Murray-Darling authorities approved a great deal too much water for large agricultural companies. In some instances they broke their own rules through gross negligence. Large-scale water theft, as well as the manipulation of water measuring technology, were not adequately pursued, writes the Commission of Inquiry. 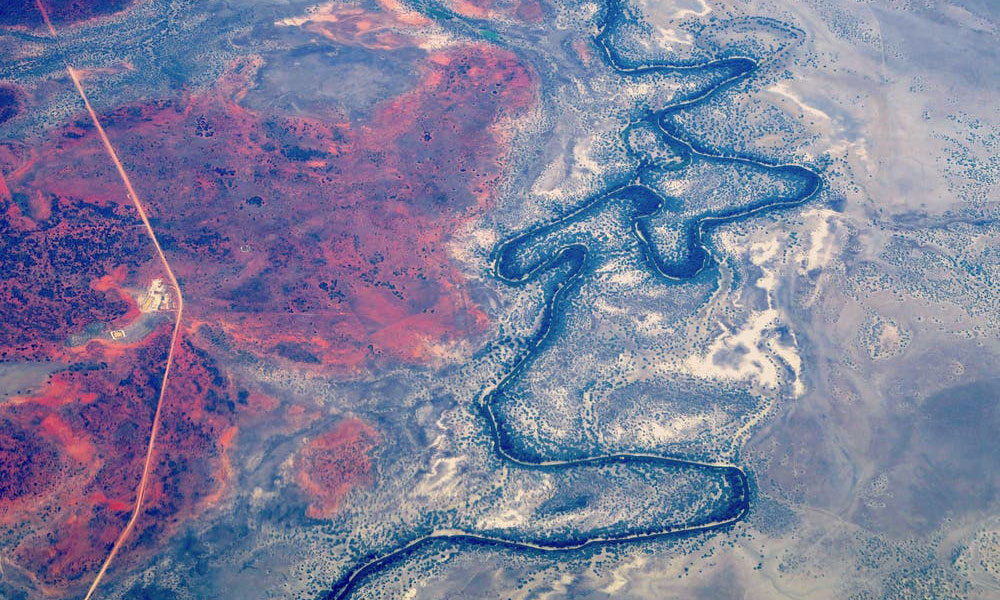 Together with their tributaries, the Murray and Darling rivers are the lifeline of an area as big as Germany and France put together. Close to the water the red dust of the Australian hinterland makes room for grasses, bushes and eucalyptus trees. (Image: David Gray / Reuters)

Water usage rights for the environment

But the responsible politicians and the Murray-Darling Basin Authority rejected the criticism outright. The Murray-Darling authorities are proud to have introduced 2,000 gigalitres of water into the river despite all political problems, said a spokesperson for the office.

Several water usage rights have been bought back from farmers and this means that more water has been recovered for the environment. This is unique in the world. The authorities have also successfully encouraged the agricultural companies to modernise their irrigation systems and save water. It is on the right track towards correcting hundreds of years of misuse of the river system.

The 21-year-old daughter of the sheep farmers from Tolarno Station, Kate McBride, has already been campaigning against water misuse and for the future of her family business since she was a teenager. Together with other farmers from the lower part of the river system, she flew to the subtropical north at the upper course of the Darling in a small rented aircraft. It rained heavily there, whereas the lower course has been experiencing a drought for three years now.

McBride's voice trembles with rage when she describes what she saw along the way: It is green everywhere in the massive agricultural irrigable area. Wide channels between the cotton fields and kilometre-long collecting tanks are full of water. "This has to stop", she says with rage, "it can't be the case that on the upper course of the system water is pumped out to water massive cotton fields of large agricultural companies, while people and animals down the river are fighting for survival." Many people on the lower course agree. 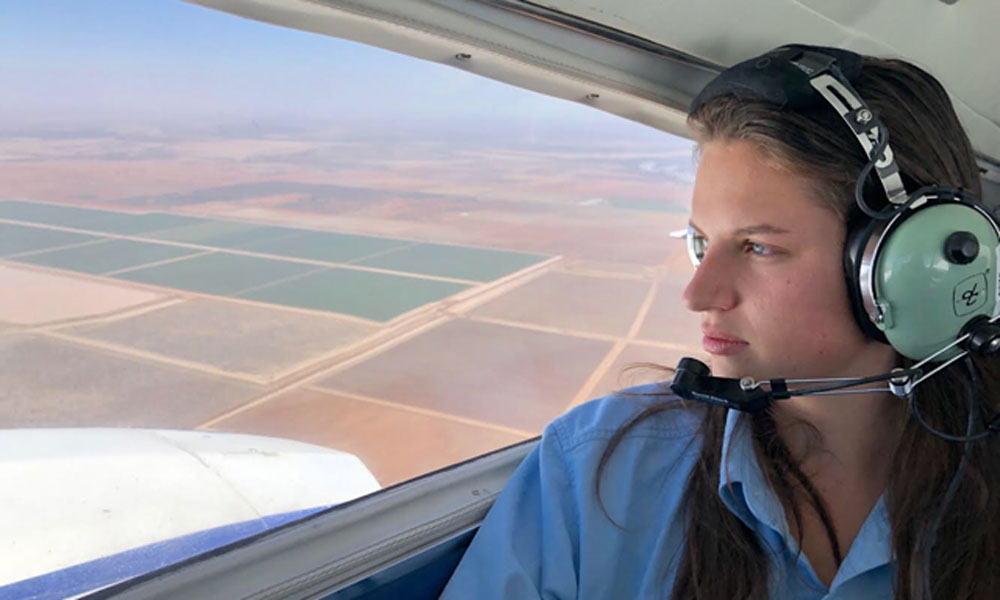 A frustrating sight: During her flight over the areas on the upper course of the Darling river the young water activist Kate McBride sees lush green, irrigated fields. Whereas water is running out on her family's sheep farm on the lower course. (Image: PD)

Huge amounts of water never reach the river system. Because many large companies in the north have bought the right to pump out the flooded landscape after storms and monsoon rain and store the water in private reservoirs. "This is how the cotton farmers get their water", explains the spokesperson for the Murray-Darling Basin Authority.

Over ninety percent of the high-quality cotton in Australia is grown on the upper course of the Murray-Darling river system. Cotton plants are extremely thirsty; but the entire harvest is worth almost two billion dollars. It is mostly exported to China and India. Textile companies from these countries have invested in Australian agricultural companies.

The managers of the companies and many smaller independent cotton farmers on the upper course are tired of always being cast as scapegoats. Michael Murray from the industry organisation Cotton Australia says that many cotton farmers are also affected by the drought. The Australian cotton producers also reduced their water consumption considerably in recent years through improved irrigation methods.

The politicians are responding rather cautiously to the findings of the Commission of Inquiry and the criticism from farmers on the lower course and the environmentalists. This applies in the case of the representatives of the conservative parties of the government coalition and those of the oppositional labour party. Both sides stress the desire to stick to the rescue plan of 2012 and improve it. There are elections in the coming months, on a national level and in the state of New South Wales, which is strongly affected by the water shortage. The situation is complicated, the interest groups involved in the matter are powerful. It is too risky for politicians from the two big camps to tackle the topic now. 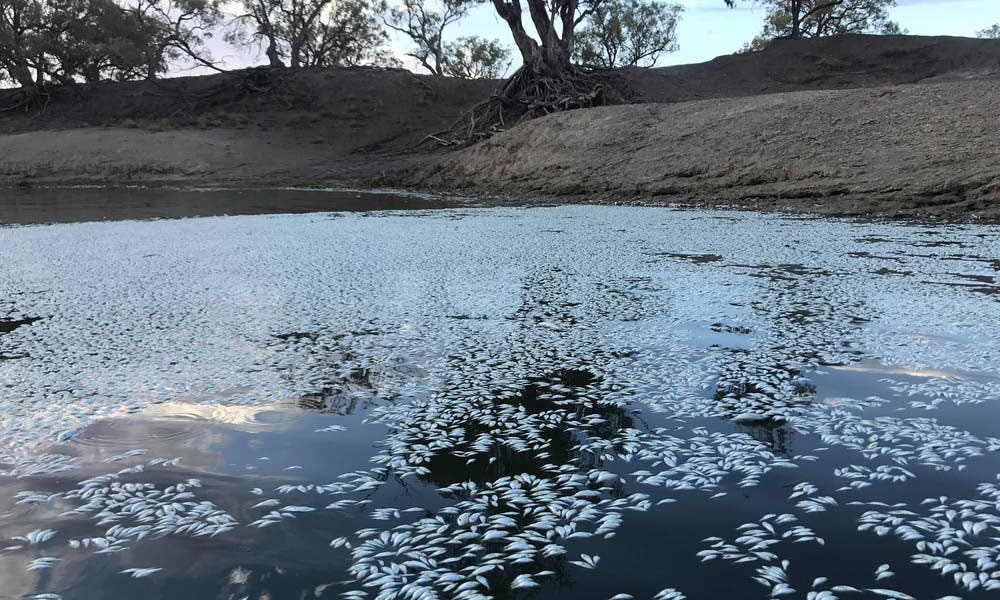 At the end of January vast numbers of fish died in Menindee and elsewhere in the lower part of the Murray-Darling river system. The authorities are putting the blame solely on the drought. (Image: Graeme McCrabb / EPA)

The Greens – a small party in Australia – are calling for an immediate ban on pumping for large agricultural companies in periods of drought. "These people simply take too much water from the river system and do not care what happens to the people and nature down the river", scolds Sarah Hanson Young, Senator of the Green Party, "for them it is all about profit."

Desperate measures for the voters

In order to appease the voters, the national government is now adopting frantic measures. For instance, at the end of January when millions of fish perished in the algae-contaminated water in the lower course of the river system. Employees of the fisheries authority of New South Wales tried to rescue the surviving fish by hand and with nets. The fish were transported by car hundreds of kilometres away and released back into cleaner water.

Just in time for this campaign the Deputy Prime Minister of Australia Michael McCormack visited the Menindee community on the dried-up lake. McCormack belongs to the Nationals, the smaller coalition partner of the government, who is reputed to be close to the agricultural interests. He once criticised the initial prudent regulations for the protection of the river system as "an economic attack on Australia's hinterland". McCormack only sees the "severe drought" as the cause for the present fish mortality and the decline of the massive eco system. It has nothing to do with mismanagement, failure of politics or climate change, said the second highest ranking member of the government.

NZZ, Australia battles for the last drops of water: https://www.nzz.ch/international/australien-trockenheit-im-groessten-flusssystem-ld.1459434, retrieved on 28.06.2019.