Some regions are currently coping with droughts. Dangers, measures and a look to the future.

Current condition: Eastern Switzerland in particular, but also the cantons Zurich, Zug and Aargau, are currently affected by the drought. Valais and Engadine are also suffering from the heat. 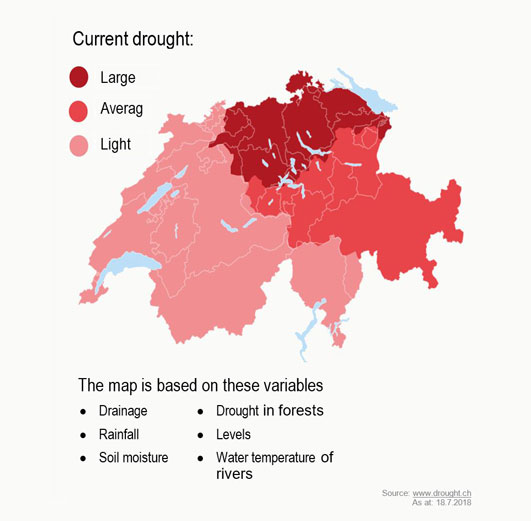 The problems: Lack of precipitation and rapid evaporation lead to dry soils – up to one metre deep.

According to Sonia Seneviratne, environmental scientist at ETH Zurich, the drought also affects watercourses and lakes. A low water level can be dangerous for fish: Not only can the habitat be massively reduced, but the water temperature may also rise. If the water temperature goes above 18 degrees, the animals do not survive. In addition, a low water level can restrict shipping in extreme cases.

The heat may also endanger the drinking water reserves. According to the Federal Office for the Environment (Bafu), the groundwater levels and sources have decreased steadily in the last three months as there has not been enough rain. The levels are currently normal to low. And local storms are also hardly able to calm the situation. However, the drinking and service water are not at risk at the moment.

The risk of forest fires also increases with the drought. A complete ban on fires in forests and close to woodlands has currently been imposed in many areas of the Canton of Grisons. There is no sign of an improvement of the situation at present as there has been no heavy rainfall for several weeks. 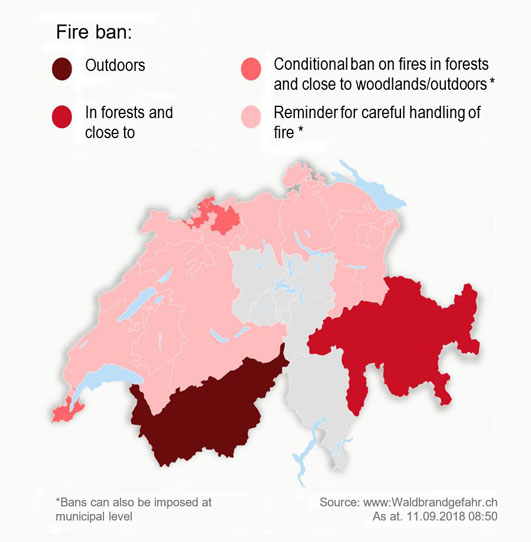 The map of the wildfire risk does not necessarily have to correspond to the map of the drought. Whereas the general drought also takes into account factors such as levels and water drainage, the risk of fire only focuses on forests.

The measures: Due to the current dry period the levels in the upper section of the River Thur, for example, dropped to such an extent that the fish had to be relocated – to the lower part of the river. According to Dominik Bonderer, media spokesperson of the Office of Public Works for the Canton of Zurich, this has become necessary time and time again in recent years. This also has to do with the soil condition of the River Thur. The water is trickling down quicker in the affected area.

Municipalities such as Hittnau (ZH) have called for water conservation. Because there has been a steep drop in the local sources and also the groundwater levels are at a very low level, the authorities are advising against using spring water for car washes or watering the grass. Hittnau has already turned off the village wells.

The Canton of Thurgau has declared a ban on the extraction of water. Due to the heat the streams and rivers are channelling too little water. There is therefore a ban on water extraction until further notice. Lake Constance, the Rhine, as well as the groundwater and spring water, are excluded. The ban affects farmers in particular, as they also pump out water from streams for irrigating their fields.

The forecasts: Based on current predictions there is no sign of an improvement in the situation. According to meteorologist Felix Blumer, widespread rain is expected on Saturday. However, small amounts of precipitation are not enough to seep into the soil.

And so it goes on: Owing to climate change droughts can be expected more often in southern Europe, also in Ticino. According to Sonia Seneviratne, environmental scientist at ETH Zurich, measurements of precipitation have also shown this trend. In contrast, according to forecasts an increase in heavy precipitation can be expected in northern Europe. As the Swiss alpine region is located exactly in between, it is not clear how climate change will affect the Alpine foothills. Many studies predict a trend towards desiccation – others do not. Measurements of the rainfall show no trend up to now.