What persistent drought means for Switzerland

Since the beginning of measurements Lake Zug had an unprecedented low water level in July. The levels of other lakes are also low. What does this mean for the drinking water reserves and how can we save water?

Will the small Swiss rivers soon dry up? And will we soon no longer be able to take a shower? Although dry meadows and empty riverbeds currently shape the image: It is not yet quite so bad. However, the persistent drought has meant that the levels of waters are lower and the water temperatures are higher than normal at the end of July.

Many Swiss rivers and lakes are channelling less water than normal at this time of the year, reports the Federal Office for the Environment (Bafu). This means less water flows from many small rivers compared to the long-term average. But the drainages of some large rivers are also below normal, for example that of Thur, Limmat, Reuss, Aare and the Rhine.

There is little water in many Swiss lakes: Lake Constance, Lake Lucerne, Walenee, Lake Zurich and Lake Zug currently have very low water levels. The level of Lake Zug, for example, has never been so low in July since the beginning of recording. 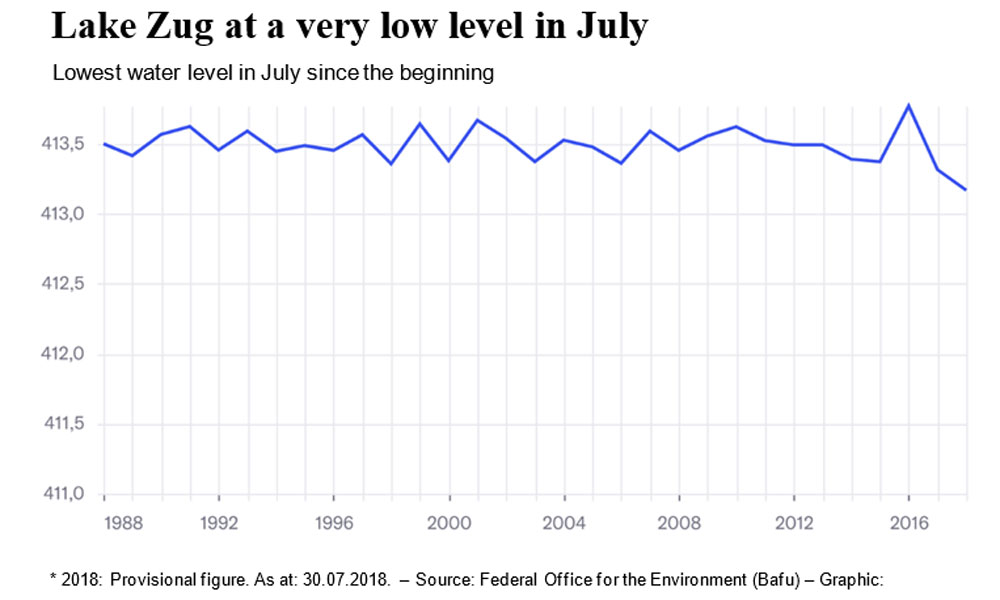 Water is not yet in short supply

What does this mean? Will the water soon be in short supply? According to Bafu, a nationwide water shortage is not to be expected at the moment. As the "moated castle of Europe", Switzerland has huge water reserves. If one divides the annually renewed amount of water by the number of inhabitants, 5,000 cubic metres of water are available per person. This is a lot compared to international standards. 20 percent of our drinking water is obtained from lake water, 80 percent comes from groundwater; roughly half of this is spring water. In recent times the groundwater level has also dropped – but is not a cause for concern according to Bafu.
Nevertheless, communities and cantons can impose restrictions on water usage due to the drought, for example, for agricultural production. In the Canton of St. Gallen, for example, the watering of grassland and maize is currently only permitted at night, water cannot be taken from small streams and lakes. The canton also asks the general public to use water economically.

How to save water?

How should one deal with the request to save water in Switzerland? The easiest way to save water in the home is when flushing the toilet. According to a study conducted by the Swiss Gas and Water Industry Association (SVGW), every Swiss person flushes almost one third of the drinking water consumed on a daily basis down the toilet. Another quarter of the water is consumed when taking showers and baths. The total water consumption in the bathroom accounts for over half of overall consumption.
Another third is used by the sink in the kitchen and the washing machine. The outdoor area - including watering the garden - contributes a relatively small amount to water consumption at just under 5 percent.

Water consumption can be reduced in the home with a few simple measures:

• Always turn off taps, replace dripping taps and leaking toilet flushes.
• If possible, water the garden with rainwater. This can be collected in containers throughout the year.
• Let grass grow. The longer the grass is, the more resistant it is to dryness.
• Take a shower instead of a bath. A bath requires 140 to 200 litres of water, whereas a five-minute shower only requires 20 to 40 litres. Additional water can be saved through so-called flow restrictors, which are fitted on the shower head.
• Use a dishwasher. A full dishwasher consumes less water than washing by hand.
• Fully load the washing machine. A full machine consumes roughly the same amount of water as a half-full machine.
• Also outside dry periods the following applies: Select the most economical setting to save hot water. Heating up water consumes 150 times more energy than supplying cold water. 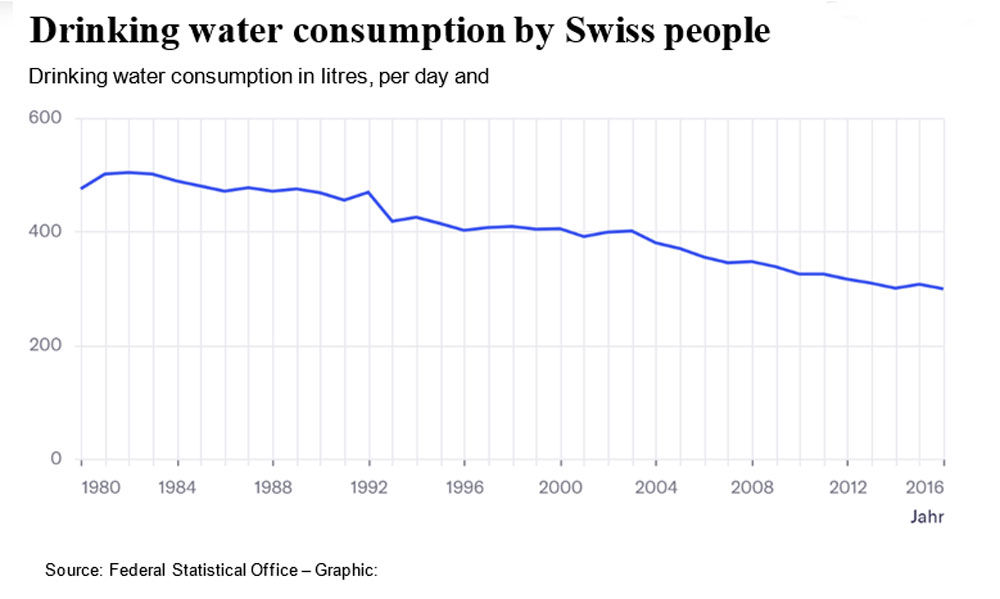 Over the long term the Swiss are consuming less and less drinking water per inhabitant. Since 1990 consumption has fallen by 21 percent. Not included in these figures are private supply systems of commercial and industrial businesses and agriculture and the water that is consumed abroad for the manufacture of imported products. 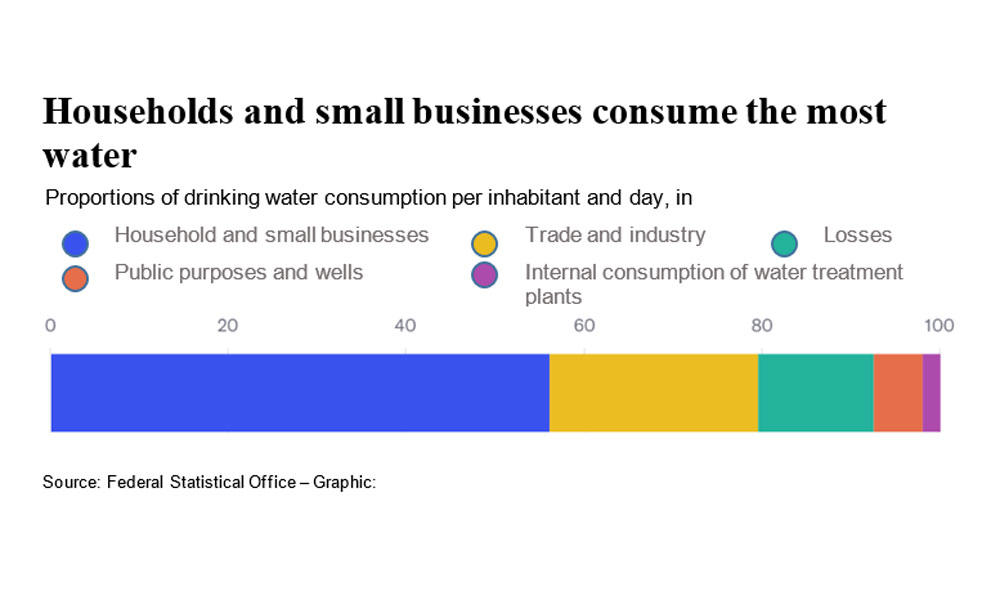 High temperatures will continue for the coming days and until the middle of August, there is no rainfall in sight. According to Bafu, the low water situation in Switzerland will get worse in the coming days.

This is precarious, mainly for living things in the waters. Due to the intense heat, streams, lakes and rivers not only channel little water, but this water is also unusually warm. Both are detrimental for many fish: They cannot survive in too little and in excessively warm water. In many cantons measures have now been adopted to rescue the fish. The Canton of Schaffhausen, for example, has dredged the tributaries of the Rhine to bring cooler water. The fish can survive in the tributaries. In the Canton of Lucerne some rivers have been fished dry. This means the fish were taken from the water and released back at another point along the river or stream.
Many cantons have also tightened up the fire ban in view of the persistent dry weather. In addition to the Cantons of Valais and Ticino, the Cantons of Aargau, Lucerne, Zug, Nidwald, Obwald, Schwyz and St. Gallen have now also put a ban on fires in forests, near woodlands and outdoors.

NZZ, What persistent drought means for Switzerland: https://www.nzz.ch/panorama/was-die-trockenheit-fuer-die-schweiz-bedeutet-ld.1407601, retrieved on 25.06.2019.