Chennai fights for the last drop of water

South India is affected by an extreme water shortage. Some politicians are conveniently saying it is down to unfortunate weather conditions. But the reasons go deeper. 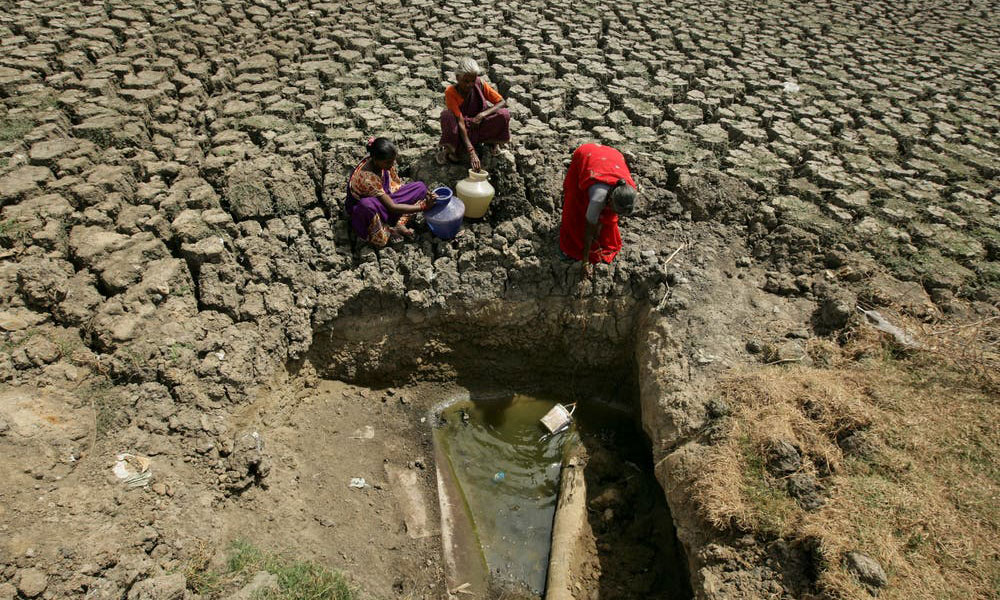 A puddle is all that remains of a dried-up lake in Chennai. (Image: P. Ravikumar / Reuters)

At times a drop of water no longer comes from the pipe in many houses in Chennai. Schools and restaurants have been closed, IT companies are instructing staff to work from home. Hospitals are only operating in emergencies. An extreme water shortage has put the city in the Indian state Tamil Nadu into a state of emergency. Four reservoirs, which normally supply the Bay of Bengal with its 4.6 million inhabitants, are almost dried-up. 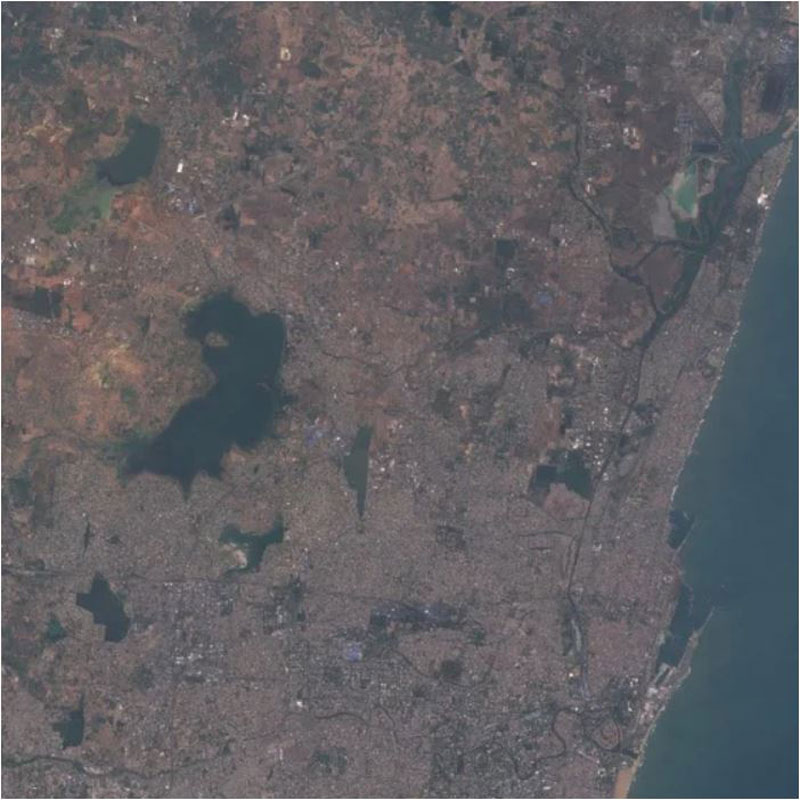 Lakes buried due to construction projects

Television pictures show inhabitants waiting in long queues with canisters for the municipal tankers to arrive to distribute the water. However, the supplies are not enough for everyone. Riots have broken out in different locations and tankers have been captured. In the city of Coimbatore, around 500 kilometres west of Chennai, hundreds of people took to the street and accused the municipal government of negligence and mismanagement. Only the middle and upper classes can afford to buy expensive water from private providers. 10 million litres of water are to be brought now to Chennai every day by special trains. 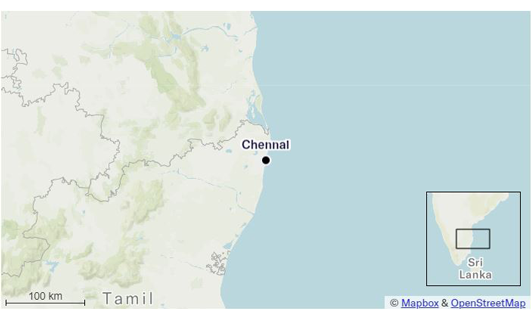 The capital of Tamil Nadu is experiencing an unusually long hot spell with temperatures well above 40 degrees. The annual rainy season started a few days ago. But meteorologists are expecting a weak monsoon as in the last five years. India's meteorological office predicts it will be November before the water supply will be normalised in Chennai.

India's meteorological office predicts it will be November before the water supply will be normalised in Chennai.

Having said that, the extreme weather conditions alone do not account for the dramatic water shortage which is accompanied by a hot spell. For a long time experts have been pressing for infrastructure investments. For example, there is a lack of reservoirs for rainwater, efficient irrigation systems and facilities for multiple use of the precious resource. Last week in parliament President Ram Nath Kovind complained that ponds and lakes in India have been buried due to construction projects. People have also been drilling for groundwater for decades. As a result the groundwater level has dropped.

Other factors include population growth and the accompanying increase in water consumption, as well as global warming. According to a new study conducted by three American universities, which evaluated data of US spy satellites among other things, the glaciers in the Himalayas have been disappearing twice as fast since the turn of the millennium. For around one billion people in South Asia this means an increasingly uncertain water supply.

In the meantime the Chief Minister of Tamil Nadu, Edappadi K. Palaniswami, is playing down the issue. He is accusing the media and the opposition of exaggerating. After all, there is not a shortage of water in the entire state. One must wait for the monsoon season. Meanwhile the justice system believes it is a failure of the government. The Court of Appeal of Chennai is demanding an explanation as to why no precautions were taken to prevent such a crisis. "Do not refer to divine fate", local media quoted the court. The reservoirs didn't actually dry up from one day to the next. 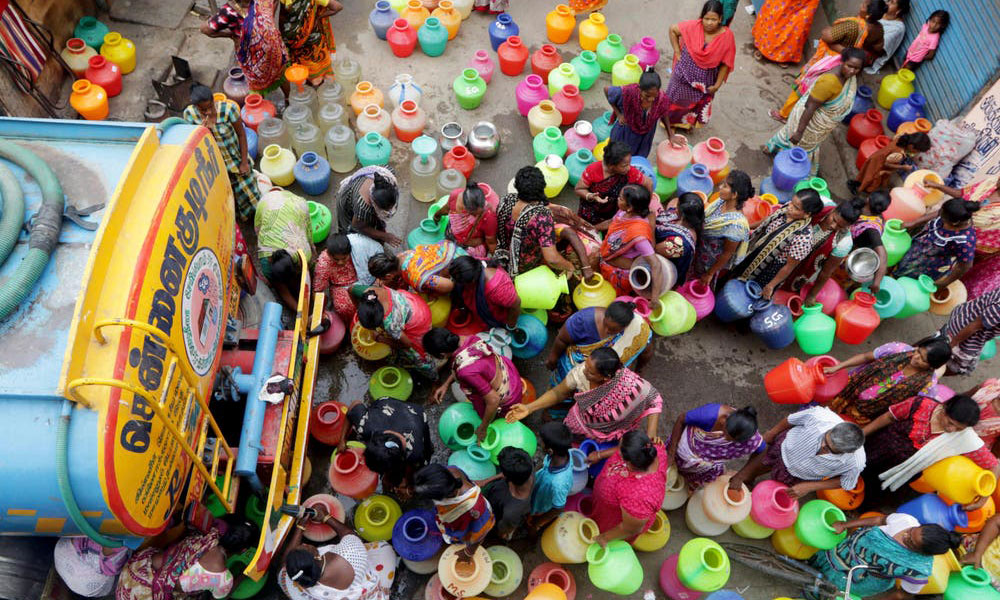 Tankers distribute water. But the supplies are generally not enough for everyone. (Image: R. Parthibhan / AP)

Minister President Narendra Modi promised after his election win in May to give more attention to the resource problem. A new Ministry of Hydroelectric Power, which combines existing institutions, is to implement Modi's ambitious goal of supplying clean drinking water to all households in the country with 1.3 billion inhabitants by 2024. In his first term of office Modi promised to give every household a toilet by 2019. Millions of Indians are still doing their business outdoors.

According to a report published in 2018 by the Indian Think Tank Niti Aayog, India is experiencing its worst water crisis to date. And it is not limited to Tamil Nadu: Around half of the country suffers from great or extreme scarcity. Approximately 200,000 people die every year due to an inadequate water supply. By 2030 water consumption will be roughly twice as high as the available resources. In the analysis by Niti Aayog, Chennai was mentioned as one of 21 Indian cities whose groundwater threatens to run out by 2020.