IN ZIMBABWE, THE WATER TAPS RUN DRY AND WORSEN ‘A NIGHTMARE’ 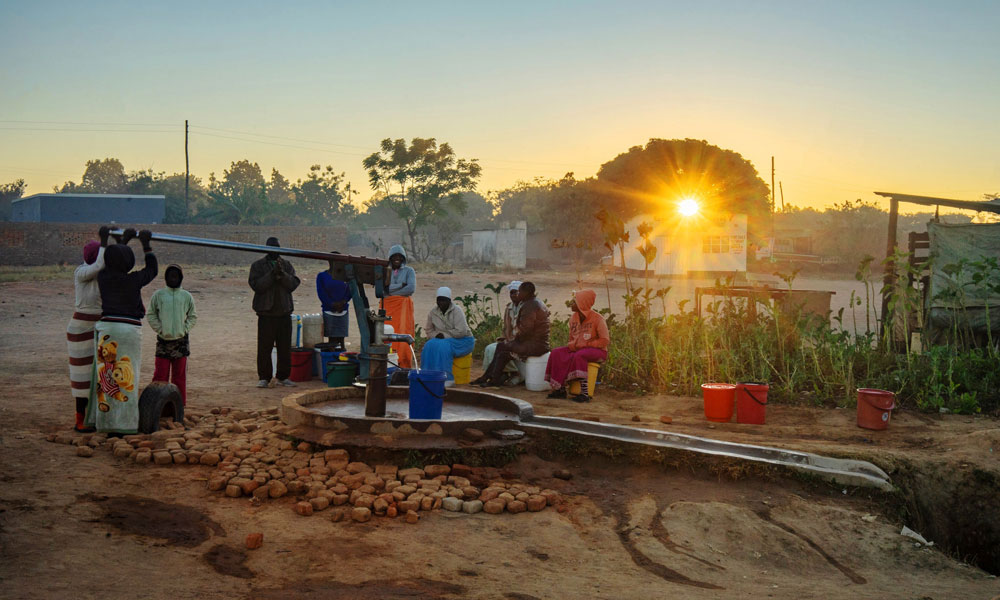 People lining up for water at a borehole in Epworth, in southeast Harare, Zimbabwe.CreditCreditZinyange Auntony for The New York Times

On the sixth day, she again rose at 3 a.m. to fetch water from a communal borehole. By the early afternoon, she was still waiting her turn at the tap with her six buckets and cans.

Much of the city had the same idea. More than half of the 4.5 million residents of Harare’s greater metropolitan area now have running water only once a week, according to the city’s mayor, forcing them to wait in lines at communal wells, streams and boreholes.

“It is causing us serious problems,” said Ms. Kaitano, a 29-year-old jeans wholesaler who was down to her last clean outfit last week. “We have to stop ourselves from going to the toilet.”

Zimbabwe’s acute water shortage is a result of a particularly bad drought this year, a symptom of climate change. Poor water management has wasted much of the water that remains. Two of Harare’s four reservoirs are empty from lack of rain, but between 45 and 60 percent of the water that’s left is lost through leakage and theft, said Herbert Gomba, the mayor of Harare. 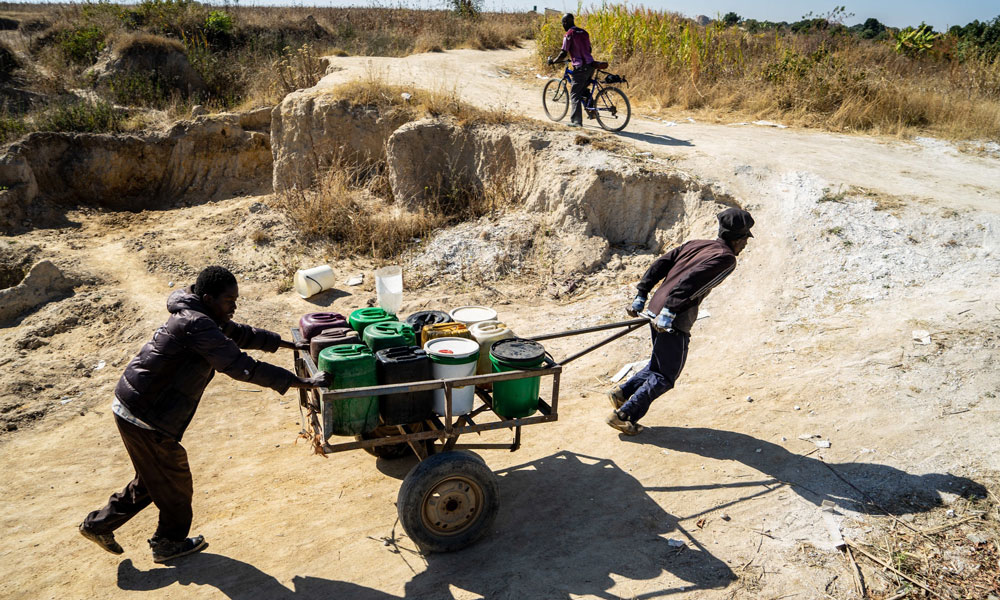 A cart loaded with water containers filled from a spring outside Epworth. In Harare, more than half of households currently receive tap water only once a week, according to the city’s mayor.CreditZinyange Auntony for The New York Times

But the water crisis is only a microcosm of Zimbabwe’s malaise. Years of mismanagement under Robert Mugabe, who governed Zimbabwe for 37 years until he was finally ousted in 2017, have left the economy in tatters. Residents are battling daily blackouts that last between 15 and 18 hours; shortages of medicine, fuel and bank notes; and inflation of more than 175 percent.

Zimbabwe has become a country of queues. In recent weeks, drivers have typically lined up for about three hours to refuel their cars with gasoline that has been diluted with ethanol, which makes it burn faster. Workers wait for hours in long lines outside of banks to receive their pay in cash, because of a shortage of Zimbabwean dollars.

The price of bread has increased sevenfold in the past year, and some medicines are now 10 times more expensive, even as most wages remain stagnant.

“It is a nightmare,” said Norman Matara, a physician and board member of the Zimbabwe Association of Doctors for Human Rights, a medical watchdog. Some of Dr. Matara’s patients can no longer afford medication, while others take it “once every three days instead of once a day,” Dr. Matara said.

The shortage of water has become an annual problem in Zimbabwe, but this year’s drought is particularly serious because it has occurred earlier in the summer and affected even more people than usual. 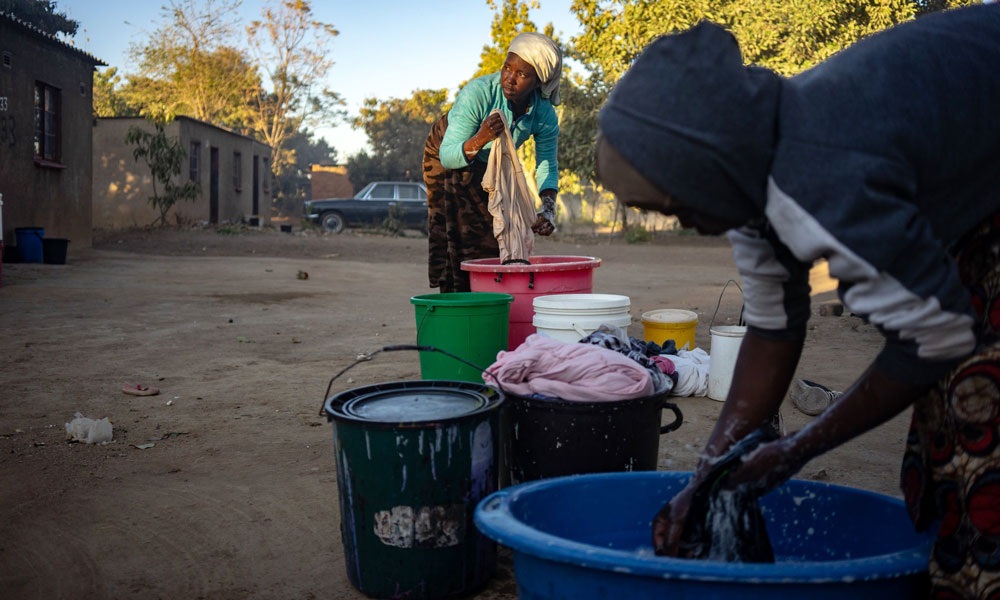 Residents of Harare Province, Zimbabwe, doing laundry in buckets. Many Zimbabweans have resorted to extreme rations of water, limiting how much they drink, wash and use the toilet.CreditZinyange Auntony for The New York Times

The level of rainfall this year has been about 25 percent less than the annual average, according to Washington Zhakata, the director of the Climate Change Management Department in the Zimbabwean government. A cyclone inundated the country in March, but it didn’t raise the water table and isn’t included in this year’s rainfall tally.

Although the field of attribution science — which studies how climate change influences individual weather events — is still evolving, it has been well established that global warming can make extreme weather events, including drought, more frequent and more intense.

Harare, a city of quiet suburbs with clusters of low-income tenements, all circling a compact central business district, has been hit hard.

“So much time spent waiting — it affects the productive part of the economy,” said Mr. Gomba. “It affects the whole cycle of life.”

President Emmerson Mnangagwa took over the country after leading the coup that toppled Mr. Mugabe. Mr. Mnangagwa had served as the former president’s right-hand man. 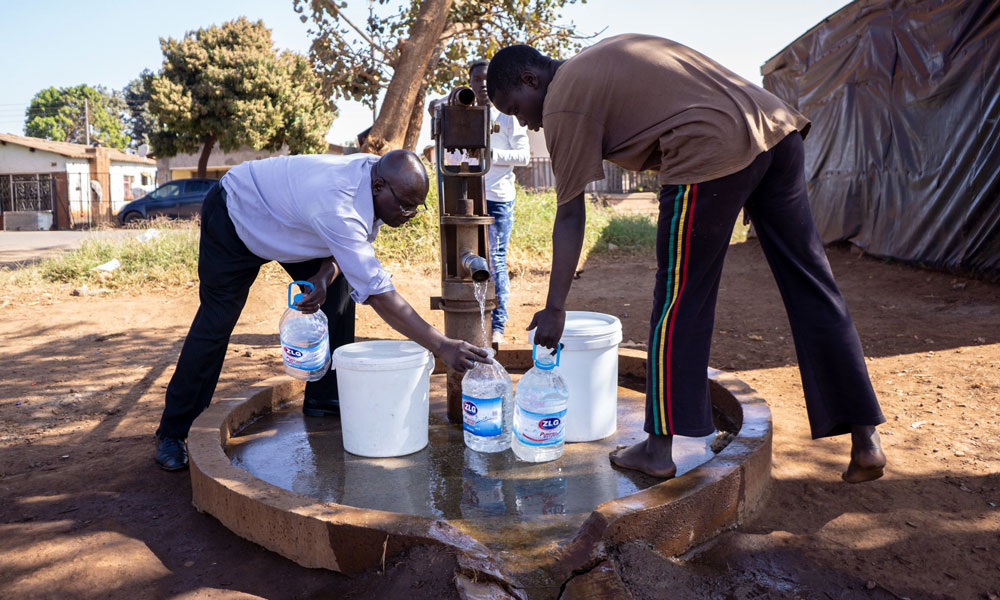 Martin Mukaka, left, woke up early to search for water in other suburbs after going without running water for days in Kuwadzana Extension, in Harare.CreditZinyange Auntony for The New York Times

Mr. Mnangagwa’s government says it is in the process of improving Zimbabwe’s economy, pointing to austerity measures that led to a rare budget surplus in the first quarter of the year.

“Zimbabwe is on a journey of reform,” the finance minister, Mthuli Ncube, wrote in a recent article. “We are heading in the right direction,” he added.

But the government has so far been unable to arrest spiraling inflation, currency devaluation and import costs. Its decision in June to ban the use of foreign currency, in an attempt to stabilize the value of the newly created Zimbabwean dollar, has instead made it even harder for firms to import goods from abroad.

“We had a window of opportunity when Mugabe left power,” said Kipson Gundani, the chief economist at the Zimbabwean National Chamber of Commerce. “But we missed that window.”

President Mnangagwa denies the fault lies with his own administration. In an interview, he blamed the water mismanagement on local politicians from opposition parties, like Mr. Gomba, Harare’s mayor. The national government is in the process of procuring a $71 million loan from the Chinese government to renovate the Zimbabwean water system, Mr. Mnangagwa said. 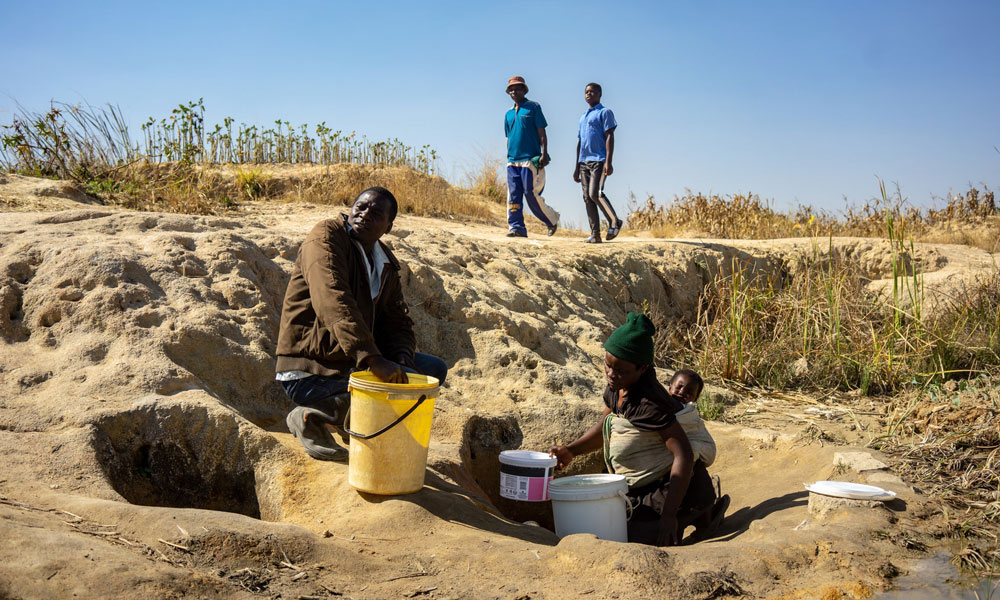 A roadside spring outside Epworth, in Harare Province, Zimbabwe.CreditZinyange Auntony for The New York Times

But the authorities’ record is hardly promising. The construction of a new dam, first proposed during the early years of Mr. Mugabe’s rule, has been repeatedly delayed. Broken municipal boreholes are often left unreplaced. And excessive construction of informal housing at the city limits has led to the overuse of springs and wells by an influx of new residents.

At a spring in the scrubland on the southern fringes of Harare, the water this week had slowed to a trickle, forcing residents to wait for about three hours to fill their buckets.

This time last year, several residents said, the same process took just a few minutes. But since then, a municipal borehole in a nearby township broke — it has yet to be replaced — and several wells dried up, compelling more residents to trek to the farther spring.

“We always have problems with water shortages,” said Patience Chiwakata, a 35-year-old subsistence farmer. “But this year it is much worse.”

The most desperate scenes this week were in the more formal settlements closer to the city center, where the waits were far longer and where scuffles broke out after some tried to force their way to the front.

Residents said they were washing less, drinking less and relieving themselves less. Many take time off from work to make sure their families have enough water.

Ms. Kaitano, the jeans wholesaler, had only once been able to take her clothes to market since the taps last dried up, losing around a week’s income. Her friend, Susan Chinoda, allowed her three children just one cup of drinking water a day, and one toilet break.