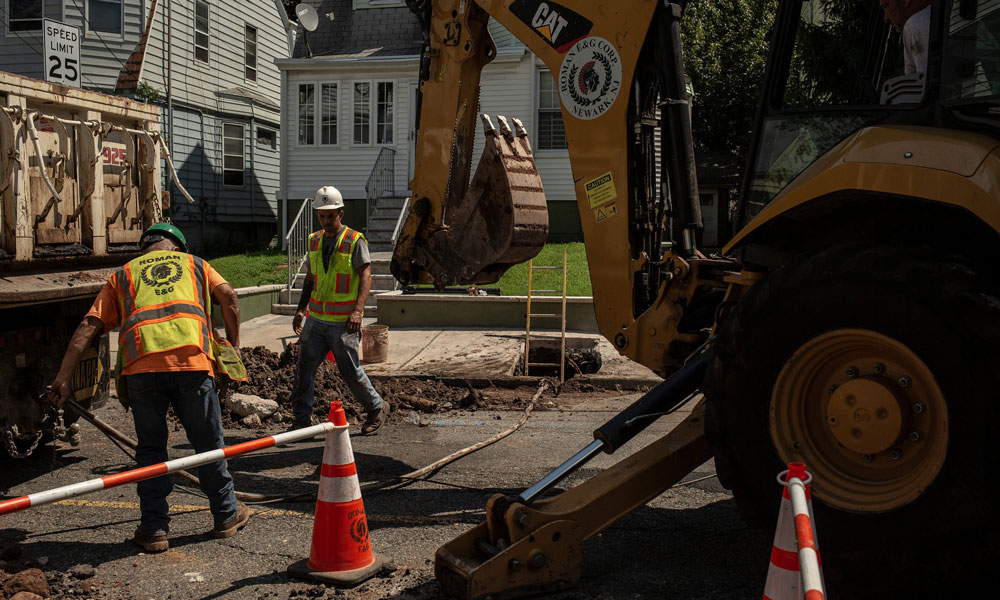 About 800 of the 18,000 lead service lines in Newark have been replaced this year. Credit Bryan Anselm for The New York Times

NEWARK — Weeks into an escalating public health crisis caused by elevated levels of lead in the water, officials announced on Monday a new $120 million plan to expedite the replacement of ancient service pipes in New Jersey’s largest city.

The new financing will allow the city to replace the 18,000 buried lead service lines in the next 24 to 30 months, according to Mayor Ras Baraka, a significant change from what city officials had estimated would take 10 years to complete.

“We are going to do this as swiftly as humanly possible,” Mr. Baraka said at a news conference in Newark, standing with the governor and about two dozen other New Jersey officials.
Years of neglect, mismanagement and denials have plunged Newark into one of the largest environmental crises in an American city in years, provoking anger, confusion and frustration among its 285,000 residents.

Though lead has long been an issue here, the situation escalated in October after a spate of tests led to the distribution of faucet water filters — the same filters used in Flint, Mich. — to remove lead that had been leaching into tap water.

But two weeks ago, more testing found that some of the filters were failing to adequately remove lead, and the city was forced to distribute bottled water.
Early last week, scenes of more than a hundred people waiting for nearly an hour under the hot August sun to pick up bottled waterfurther eroded the trust residents had in what was coming out of their taps.

Mr. Baraka said bottled water distribution would continue while city, state and federal agencies continue to test the filters and the tap water to determine how widespread the problem is.
City and county officials are expected to approve the financing plan in the coming days, enabling contractors to begin presenting bids to the city.

A water line replacement project the size and scale of Newark’s would be a first for New Jersey, and among the first projects of its kind in the nation given the compressed time frame.

“I don’t know of any other city of this size that has tried to replace all their lead service lines in this kind of time frame,” said Erik Olson, a senior director at the Natural Resources Defense Council, an environmental group that has sued the city over the lead levels.

The city has thousands more lead service lines — garden-hose size pipes that connect its water mains to individual properties — to replace than did Flint, Mich., which has been grappling with its lead-tainted water since 2014.

Since the pipes are laid mostly under private property, the city cannot act unilaterally to excavate them; residents need to request a replacement and then grant access to the city’s contractors. In Newark, where 70 percent of residents are renters, it can be difficult to track down landlords.

Mr. Baraka said he was seeking to change that, working with state legislators to create a law or ordinance that would allow city contractors to work on private property and to fix lead service lines without permission.

Hanging over the announcement on Monday was the growing frustration local officials have with the response from the federal government. Mr. Baraka, Gov. Philip D. Murphy and local officials have been calling on the E.P.A. and officials in Washington to provide financial assistance to Newark as they struggle to contain the lead crisis.

“The one that’s lacking is the federal government,” said Joseph N. DiVincenzo Jr., the Essex County executive. He turned to Representative Donald Payne Jr., the only congressman in attendance, and said, “You’ve got to bring home the cash.”

“We all know that we have to move faster and together in order to restore residents’ trust in their water,” Mr. Murphy said on Monday.

The plan includes issuing $120 million in bonds through the Essex County Improvement Authority. The county, which has a strong Aaa bond rating, can borrow funds at lower interest rates than the city itself.

The new round of financing, organized through Essex County, also removes any financial burden to homeowners for replacing the lead service lines in the city. Under the previous, $75 million plan that the city began in March, residents would have had to pay a maximum of $1,000 for the replacement work. This was seen as a financial blow in a city where the median income is $34,826 and nearly 30 percent of residents live below the poverty line.

Mr. Baraka also stressed that though the money was a loan, it would not lead to higher taxes. “It’s not on the taxpayers’ head,” he said.

About 800 of Newark’s 18,000 lead service lines have been replaced this year.

“It goes without saying that this is a situation none of us welcome, but that we are committed to getting right,” Mr. Murphy said.